It was Tanvi’s 6th birthday on the 6th of June 2012. I had decided to spend exactly six thousand rupees this time. I wanted to see if I could give her a memorable birthday without spending an exorbitant amount of money.

Here’s how: Lunch at Malleshwaram Sevasadan (home for under-privileged girls) - Rs 600, Make A Wish Foundation - Rs 1500, and the rest for dress, cake, and going out.

Why am I writing all this on my blog?

I remember Saru Singhal’s FB status message, long back, when she had mentioned, how someone was constantly bragging about the causes he was contributing to. And Mithlash responded that, at least, he is showing off about a good thing.

For the longest time in my life, I too believed in the saying that when you do something good, even your left hand should not know what your right hand is doing.

I started earning in the year 2000. My very first job was as an English Lecturer in a Government First Grade College. The salary was Rs 3000. I got my first paycheck after 3 months of working – Rs 9000. The first thing I did was keep aside Rs 900. I had created various heads Home, Shopping, Mother, Savings, and God’s Money. The 900 went under God’s money. 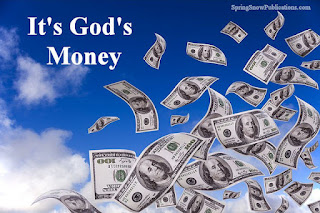 I had read that 10% of what a man earns must be kept for God. It basically means to keep aside some amount from your earnings for a social cause, to help someone less fortunate than oneself.

That’s ten years of using that amount for causes I felt strongly about. Even my mother didn’t know what I was doing with that money. She thought I was putting it in the hundi (donation box) of temples. After all, it was for God.

Somehow, I wasn’t comfortable with the idea. I wasn’t sure if it went to the upkeep of the religious place and thus helping the needy and the poor or if it was misused by the government.

It took me more than a decade to realize that my reservations were right. When I learned about the State Mujarayi Department, I couldn't believe it at first. I was glad I did not put any money in the hundi all those years. The government controls Hindu temples. Ironically, in a so-called secular country, the government does not control churches and mosques. All churches, mosques, and madrasas use the money they collect for their own welfare, expansion, and growth. But, the money (nearly Rs 7300 crores; Tirupati alone contributes almost 3000 crores) collected from 1,30,000 temples across India is used for "minority" (Christian & Muslim) appeasement. It is used for activities like sponsoring Hajj pilgrimage with subsidies (it has recently been stopped), special salaries & pensions to mullahs & fathers, education courses & scholarships, and so on. Barely a small amount goes to the actual development of the temples themselves. The loot and the misuse are unimaginable and have been going on for ages, thanks to the ignorance and spinelessness of idiotic Hindus like me who are fooled every day in the name of secularism.

Anyways, at the time, I did not know any of this. I searched for organizations to contribute to. In the early 2000s, I still did not know what Google was, and that it would throw up any information we sought in a jiffy. So I would search various magazines and newspapers and make a note of institutions I wanted to support.

I was looking for institutions that were making a difference in the lives of others. CRY was the first institution I contributed to. It was for the cause of girls education for a year, and survival needs for 2 years. Later on, I added Akshaya Patra (meals). Parikrma (food and education), Help Age India (senior citizens), and Make A Wish Foundation (fulfilling wishes of terminally ill children).

Jean Sasson writes in her book, Growing up Bin Laden that "the joy of giving is more acute when sharing creates personal hardship. It is easy enough to share when one has plenty". True that! Given my background and my financial condition at the time, the money I was keeping aside was hard to part with. But the dogged determination to continue doing the right thing ensured that I never once held back. It gave me immense joy then. And today, after all these years, as I look back, it is the same feeling of fulfillment. I don't know where the 90% of the money I earned went. Survival needs ate up everything. But that tiny 10% is the reason for a satisfied smile.

Jean Sassion also states that "Sharing does not necessarily mean the giving of money or goods. There are times that the greatest gift is to set aside one’s own troubles and listen, to care about another’s heartache". But I have learned that planned and consistent monetary help to institutions and individuals that are deserving is the need of the hour.

Check out my other blogs

Sujatha Sathya
Bangalore, Karnataka, India
I got into blogging when i asked myself "Can I do it?" The answer was "Let me try & find out" So here I am - thinking out loud, will go as far as it takes me. Come along :)