A Wedding & A Bachelor

He has many avatars - 'chota chatri' on Twitter, 'the game returns' on Email, & 'maniac hunter' on Blog. The man in question, Madhav Mishra, is someone I’ve been reading since the past 4 months. His blog is aptly named ‘Simple Stories’ - the stories & the narrative style both are so simple, & yet endearing, that you can’t help but come away with a smile, when you close the browser window to his blog.

It’s been exactly a month, yes complete THIRTY days, since he sent this post that he wrote for me. He was the FIRST one to respond to my request for a GP. I’m guilty of sitting on his post for so long that, now, without any further delay, putting you on to him in

A Wedding & A Bachelor:

I recently attended a marriage in my community after 6-7 years & that too in Delhi. Since I’ve moved to Delhi from Bangalore, a lot of things have changed. For example, every 3rd day, a new relative pops up, in some area somewhere in Delhi. So this mama of my dad came from thin air & turns out he has a son who is getting married which I had to attend. There was only 1 catch: contrary to their claim, I had not seen ANYONE from that part of my family. So I ‘SUITed UP’ & it took a good 1 & half hours along with a LOT of weird stares in metro to reach my destination.

The thing about attending marriage in my community is you will meet a lot of people who are related to you. So I did a lot of bending (read touching feet) before I found a place to sit between gents where I was grilled with questions like ‘what I do, where do I live, whether my cook is male or female & WHY AM I NOT MARRIED’ for some time. Before I knew it, the news spread like fire that I am NOT married. And I found out that my relatives work in ‘oh my god’ to ‘holy crap’ to ‘you ve got to be kidding me’ firms.

And when I was taken to the female den to meet them, they were already prepared with their set of questions. I couldn’t wait for the baraat to leave & reach the banquet hall. Finally, amidst a LOT of dhol sounds & really annoying music (it will be pure cruel to call it music, it is annoying to say the least). I didn’t know I hated so many songs. The band was voted useless because they asked for tea & could not play ‘chammak challo’.

Since a lot of my folks had come from native place (a place in Bihar which according to mythology, was ruled by King Janak), they were confused as to what a banquet actually is & why the bride’s side hasn’t set up a pandaal instead. The thing that makes my folks different from any person in the rest of India is, we like to eat & feed. Not your average eat but I-can’t-walk-after-eating eat. There is a saying in my region ‘if you don’t have a pot belly, your family doesn’t love you’

So the two major questions were ‘are we supposed to stand & eat?’ ‘Why are they giving packaged glasses?’ Since a lot of people could not find place to wash hands, the dustbins were overflowing in no time along with the ‘small’ plates. And the good thing about attending a wedding where not many people know you is, you can eat LIKE-A-PIG & still get away *BURRRP* 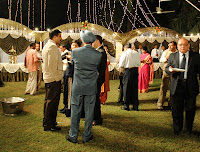 So, when the time for the dinner came, the bride’s father had to arrange for proper tables chairs for everybody to sit & eat because buffet system is for beggars & it’s insulting to ask for food. Ideally, the host should serve & force people to eat it (those of you frowning wait till you meet any of my folks at a party cribbing about the arrangements. Do yourself a favor & DON’T try to reason with them)

The wedding proceedings start after the dinner & go up till wee hours in the morning so the people eat, take a nap & still come for blessing the couple in the morning. God bless the guy who kept pestering the catering people to open up the coffee stall because it helped me watch the marriage ceremony till the morning. I still can’t understand how bride/groom sit with a straight face while speaking those stupid vows (I will share my body, WEALTH & soul with you.)

Check out my other blogs

Sujatha Sathya
Bangalore, Karnataka, India
I got into blogging when i asked myself "Can I do it?" The answer was "Let me try & find out" So here I am - thinking out loud, will go as far as it takes me. Come along :)